The new rules of golf came into effect on 1 January 2019 and are now embedded.

These local rules reflect these changes including pace of play.

The R&A and USGA have clarified whether a competition being run using temporary measures to help minimise exposing players to COVID-19 is being “played under the Rules of Golf”. In response to the COVID-19 pandemic, both governing bodies have issued guidance so that Committees running golf competitions can better understand the options available under the Rules of Golf. The R&A’s expanded guidance, which supplements the information contained in the Committee Procedures section of the “Official Guide to the Rules of Golf”, is outlined on their website.

For golf at Haste Hill this has been interpreted as follows:

• The Rules of Golf have not been modified. In adopting the following modifications, the Committee is ensuring that, the competition is being played under the Rules of Golf.

• Scoring in Stroke Play (Rule 3.3b): In view of concerns around handling and exchanging scorecards (which may be in paper or electronic form as already provided in the Rules), on a temporary basis, the Committee has chosen to allow scoring in stroke play that does not strictly comply with Rule 3.3b or do not comply with the normal methods used under Rule 3.3b. Players may enter their own hole scores on the scorecard (it is not necessary for a marker to do it). It is not necessary to have a marker physically certify the player’s hole scores, but verbal certification is required as requested and all scores should be agreed after play. It is not necessary to physically return a scorecard to the Committee, these can be returned via a photograph attached to e-media.

• Players are allowed to centre the flagstick in a safe manner which does not involve using the hand, even when wearing a glove or using a towel (for example, by using a club). The centring of the flagstick is also allowed while another player putts (this may be desirable in windy conditions when the flagstick is required to be left in the hole and is leaning towards the player making the stroke).

• To be holed a ball must have come to rest with part of it below ground within the hole.

• Players are requested to make their best efforts to smooth bunkers using their feet or a club, after playing a stroke.

• Preferred lies may be taken in bunkers, with players allowed to place their ball in the bunker within six inches not nearer to the hole than where the ball came to rest.

Local Rules apply to various areas of the course and MUST be adhered to.

OUT OF BOUNDS - POINTS OF CLARIFICATION

A ball is out of bounds if played in, over or through the natural boundaries of the course. i.e. fences, hedges, ditches and woods together with the white posts which define the confines of the course. The Bird Sanctuary, Firing Range, Cemetery, Putting Green, Car Park, Club House and surrounding pavements are all out of bounds.

The ball is OOB when all of it lies out of bounds. No relief is allowed from objects defining out of bounds such as walls, fences, railings and stakes as they are 'outside of the confines of the course'.

Pace of Play Policy - When playing in club competitions if a group finishes the round more than a hole behind the group in front and over 4 hours 15 minutes from the time of starting, all players in the group are subject to a one stroke penalty. (See model local rule K -1).

Players should report slow play to the Committee. 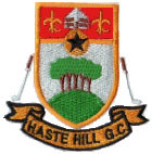 Winter Rules are in Operation – When a player’s ball lies in a part of the general area cut to fairway height or less the player may take free relief by placing the original ball or another ball in and playing it from this relief area: the reference point is the spot of the original ball and the relief area is within 6 inches of this point. When taking such relief it must be in the general area and not nearer the hole than the reference point. Once the spot to place the ball has been determined the procedures for replacing a ball under rules 14.2b(2) and 14.2 are to be followed.

Damaged greens – ‘Core’ holes in greens following ground work are GUR and a ball resting in such may be rolled out of the hole. In addition, a ball lying below the natural surface of the green due to other damage that cannot be repaired may be moved to the nearest point of no interference.