- A field of 38 competed for the Seniors titles 2017 on what proved to be a tough scoring day with standard scratch at 69.

The course was nicely set up with a mixture of pin positions and the greens were again in great condition.

- Stanley Yap with a score of 35 points won the Open Trophy (up to 18 handicaps) from George Sheriff on 34.

While in the Open Shield (19-28 handicaps) it was Geoffrey Ballance who prevailed with 35 points from David Digweed on 33.

A fantastic 114 turned out for the Haste Hill Open. The greens were agin in great shape and there was great feedback from our visitors. Standard scratch was 70 which reflected a tough day on the course, though the winners didn't seem to worry about that!

Ziggy Yousaf was in great form with the putter and plotted his way to a 63, which is often the Open winning score, he duly lifted the Open Trophy. Neil Sherman also brought his big day form with him and added the Open Shield to his Club Day Shield earlier in the year. In the Scratch a chip in at the last by Kane Stone (our greenkeeper) was just enough for him to lift the Lin-Hel Cup with a 74.

Thanks to all Members who turned out to make it a great day and to our Guests from other Clubs who ensured it was a big field - thank you all. 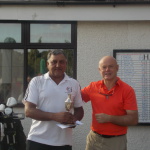 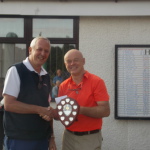 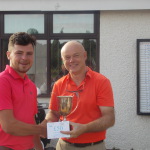 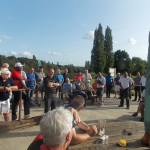 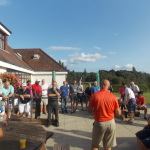 17 & 18/06/2017 - The Course Championship
- One of the strongest fields in memory competed for the honour of being Club Chamion 2017. The weather was fantastic and the greens in great shape over the weekend.
- Mark Stanton shot 73 and 76 for a 149 total eventually prevailing in a play off from Jimmy Cooley who scored 77 and 72 for his 149. Steve Brownsea, Paul Dimmer and Stewart Farrell were all just 1 stroke back on 150.
- In the Net for the Ferndown Plaque it was Paul Dimmer with 136 who pipped Stewart Farrell on countback (lowest second round).  In the Bronve Medal (15+) Division Richard Galley found form to shoot a two day 136 total and win from Chandra Morjaria who shot a seconf round best of day 62. Dipesh Patel shot the best of the day net 64 on Saturday.
- Congratulations to all of the winners and thanks to everyone who took part to make the competition so good.
- Pictured below are Mark Stanton and Richard Galley receiving trophies from Club Captain Paul Dimmer. And Paul Dimmer receiving his from Club Secretary Stuart Cella.

- Another big field with 75 competing . Neil Sherman shot the best score of the day to win the Club Day Shield (15+ handicaps). Jimmy Cooley won the J Clarke Salver with a gross 71 nett 66, at the same time reducing his handicap to 4.

- The Club day is always the first round of the Presidents Cup, a 72 hole comp over the four big club medal days. With scoring good many players are in contention still.

- There were also surprisingly 2 holes in 1 at the Club Day!  Kevin Byrne holed out for an Ace at the 5th hole and his feat was matched by Bruce Clark at the same hole a couple of hours later!  Well done gents - look out for your notification from Howdidido.

- Pictured below: Jimmy Cooley receiving his trophy from Club Captain Paul Dimmer, Bruce Clark retreiving his ball from the 5th and Neil Sherman with the Club Day Shield. 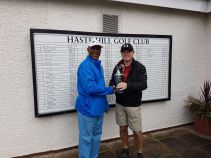 There was a great turn out for the charity day with Leroy Benta scoring a fantastic 41 points to win the day.

The day has so far raised £355 for the Charity - many thanks to those who played and contributed through their entry fees. Thanks alos to those who couldn't play but still made a donation. Your generosity is appreciated.  Additional contributions from signed photos etc. will be added to this. 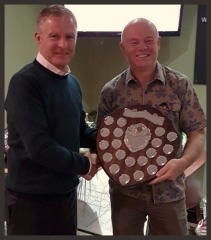 A fantastic field of 61 players entered this, our final major f the year.

Again, the course was presented in excellent condition and the weather also contributed to provide perfect playing conditions. Surprisingly, only four players were able to break par.

Stunning golf, by in form Paul Dimmer, secured victory with an impressive 63 closely followed by Sanjay Agarwal with 64 and Chris Kelly with 66. This competition was the final round in the Presidents Cup, awarded for the best aggregate scores in this competition, our J Clarke Day, our Open and our Captains Day. Patrick Clasby was declared the winner.

The day was completed by a thoroughly enjoyable social gathering including a quiz, a raffle and an auction. A huge thank you to Graham Wroe and Stuart Cella. 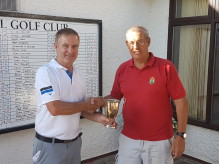 Three players, Wolfgang Wita, Patrick Clasby and Walter Kwok posted excellent scores of 65 net with the count back rule the only means in seprarting them. 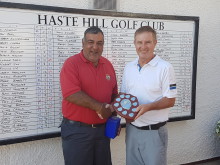 Glorious weather and the course in fantastic condition provided the perfect setting for our 2016 Open. Much appreciated support from Batchworth, Ruislip, Brent Valley and many other local clubs helped push entries post the 100 mark.  A wonderful days golf was had by all. Breaking par was a tough task, with only seven players managing to do so. 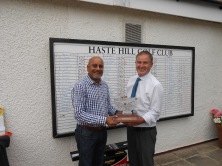 Another fantastic day at Haste Hill - beautiful weather, wonderful golf followed by a lovely social evening and night.  The customary 'tipple' on the first tee box gave inspiration to most and courage to those brave enough to engage in the fun.

The display of wonderful golf, fun on the putting green, excitement of the tombola and the music and beverages all contributed to a fantastic day.  Congratulations to Amish Shah for winning the Captain's Trophy with a stunning 63.  Well done to all other prize winners and a big THANK YOU to all those who helped me make it such an enjoyable day.

Our course championship, a 36 hole two day stroke play competition, is our main event of the year. A true test of golf that produces the best player in our club. Unfortunately, torrential rain in the preceding days had caused severe damage to the course.

63 players set out on Saturday for Round 1. Scores reflected the tough playing conditions, with only three players breaking net par. Steve Brownsea, defending champion, led the gross with 71 and sharing the net with Lee Whittaker on 66.

Round 2 on Sunday saw a reduced field of 44 continuing the battle. Whilst the weather remained kind the scoring still proved difficult with only one player, Ziggy Yousaf, breaking net par with 67.

Liam Cella made a move on the back nine, drawing level with Steve Brownsea on 17 in the gross. However a par on the last gave Steve a 'back to back' victory. Liam's efforts were rewarded in securing the overall 'net' title. After two days of great golf the results were: