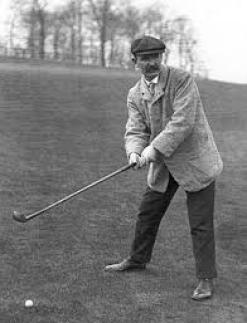 Alexander 'Sandy' Herd (left) was the architect for Haste Hill Golf Course, designing the original 9-hole course & co-designing both the extended 18-hole course & the 9-hole pitch & putt, relief course.
Sandy Herd was the Open Champion of 1902 & finished in the top 10 on a further 19 occasions. He was the golf professional at Moor Park and would likely have won many more majors had he not been at his peak at the same time as the Great Triumvirate Of Golf, Harry Vardon, James Braid & John Henry Taylor.  He was also the first golfer to win the Open using the Haskell rubber-cored ball.
Sandy passed away in 1944 of pneumonia, following an operation, at the age of 75. 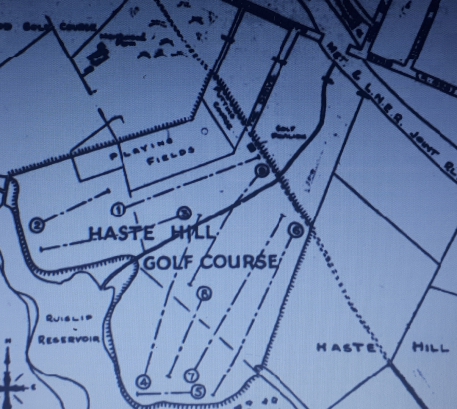 The map for the then 9-hole course is left. Comparing this map with the current layout, taking into account the stated lengths of the original holes, topographical evidence on site & looking at the planting on the course, the following is the current understanding of each hole. Bogey (par) for the course was 38.

Hole 1 (425 yards) ran along what is now the 10th hole, in the same direction, although it was just over 100 yards shorter than the current 10th. It is believed the tee box was in the area around the current 1st tee box and the Clubhouse patio but could have been a little forward of that, toward the left hand bunker on the 18th. The green for this hole is believed to have been just before  the ditch between the 150 yard markers.

Hole 3 (370 yards) was almost exactly the current 15th, although with the hole being a little longer then, the green would have been a little behind the current green and slightly up toward the current 9th green. You can see what appears to be the remains of the banking of a green, just beyond the brook on the current 9th hole.

Hole 4 (380 yards) ran from a tee box in a position on the current 9th hole around 25 yards closer to the ditch, than the current green and was played up to a green that is now the 9th tee box.

Hole 5 (175 yards) is pretty much the 8th hole, played in reverse. Surviving evidence of the ladies tee box is believed to be the small mound to the side of the green, whilst the green for the original hole was in area between what are currently the 3rd tee box, the 7th green & the 8th tee box. Players walk down what was likely the bank of this green to get to the 8th tee box.

Hole 6 (435 yards) this has been one of the toughest to place. The tee box is believed to be in the position of the now 7th green. The green for this hole is even more difficult to place. There was of course a spare green on what is now the 3rd hole, on the plateau, by the trees to the left as you cross the ditch. This could have been the original 6th green but it seems to be a little short for the yardage given. Another train of thought and more likely to be the case is the current 3rd green was the 6th green, which would also explain the line-up of this green appearing to be at an angle to the current fairway.

Hole 7 (448 yards) this is almost exactly the 2nd hole although it is not known where the tee box was sited and it is known the current tee boxes are not original. It could be that the ground that appears to be an abandoned tee box in the trees on the left between the ditches was the tee box although again it would make the hole a little short for the yardage given.  Possibly that was the ladies tee at the time and the men’s tee was a little further back, given the current 1st hole didn’t exist at this time. Another possibility is the ‘spare green’ on the 3rd hole, was the tee box, at the time.

Hole 8 (166 yards) is now the 17th hole, very little has changed, although it is now recorded as 5 yards longer.

Hole 9 (388 yards) followed the line of the current 18th.  However given that the hole is now 11 yards shorter and the then 1st tee box may have clashed with the current green, it is possible it has since been moved slightly up toward the clubhouse and slightly away from the hedge along what is now the first tee.

In addition to the 9-hole course, there was putting course that stretched across from a line just inside the current entrance gate, across what are now the 13th tee boxes & the 12th green and over to the footpath. It would have been quite an impressive size probably reaching down as far as the stockade fence in which the golf carts are now stored.

As well as golf, there was also a sports field that covered most of what is now the 11th, 12th & 13th holes and the practice area alongside the 10th. 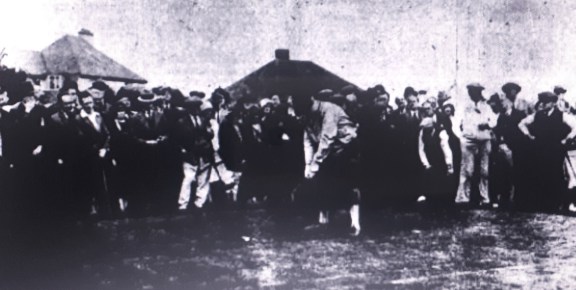 A letter just a couple of months before the first match was played on the new course, seen left, advised the following.

'Regular users will find many changes , The Ist, 2nd and 3rd holes are on a site previously occupied by the playing field and a portion of land adjoining the Northwood Golf Club and are entirely new. The 4th, 5th and 6th will be the present 1st, 2nd & 3rd   renumbered.  A few yards to the right of the present 4th, green which has been demolished will be found the 7th hole - an entirely new one. The 8th and 9th remain the same but the 10th is new. the tee being near the clubhouse and the green over the brook. The 11th will be played from a new- tee on to the present 7th green and the existing 5th will be utilised as the 12th. A new hole adjoining the present 6th, will be the 13th and the 14th, 15th and 16th are situated on Haste Hill. At the back of the existing 5th hole is a new green for the 17th hole. A new tee will be provided on the recently demolished 4th green for playing the 18th which is a new green slightly to the right of the old 3rd hole. The extension will do much to relieve the congestion that takes place especiallly at weekends and should still further enhance the popularity of the course.’

Bogey (par) for the course was 70. From this description the following can be deduced.

Hole 1 was the current 13th hole, or more likely the whole of the 13th & 14th holes combined, there have been a number of alterations in this area of the course since.

Hole 2 (126 yards) was the 11th, again some alterations have been made since.

Hole 3 at that time, is now the 12th, almost exactly as it is today.

Hole 4 (425 yards) is the current 10th (but still shorter at this time), with a question remaining over the position of the tee box.

Hole 7 was an entirely new hole, what is now the 16th.

Hole 8 (166 yards) would have been more or less exactly what is now the 17th, although it is now recorded as 5 yards longer.

Hole 9 (388 yards) is the current 18th, although the position of the green is still uncertain.

Hole 12 (175 yards) would have been the current 8th hole, still played in reverse / uphill with the green beside the right hand bunker on the current 7th.

Hole 13th is now the 3rd. It is still being researched as to whether this hole was played to the ‘spare green’, just over the ditch or to what is believed to have been the original 6th green, that is currently the 3rd green.

Hole 15 is now the 5th ** although the green has been lifted & relayed.

It is known part of the putting course remained at the site, filling an area considered large enough for a bowling green to be constructed and is likely to have taken up most of what is now the car-park.

1936 - A 9-hole relief course opened. A par 3 course, it was added to ease congestion and prevent the loss of revenue to the soon–to-open Harefield Place (Uxbridge) Municipal Golf Course. The pitch & putt course was laid out on  the land to the left of the current 1st hole, ran up to  behind the current 6th green and out to Chestnut Avenue. It also utilised some unused land on Northwood Recreation ground. Little else is known about this course, other than the first hole was 65  yards and the second 125 yards.

1937 - Further alterations were made to the 1st (now 13th & 14th) & 2nd (the current 11th). These suggestions were to ease congestion at the beginning of the course.  The 12th hole (now 8th) was reversed and played downhill due to the number of balls being hooked onto the 13th (now 3rd) tee box and running onto the 17th (now 7th) green.

1941 - Believed to be the year the 9-hole pitch & putt course was ploughed over, for the planting of food, during World War II. With the acquisition of King's End Golf Club that became Ruislip Municipal Golf Course, the opening of the 10-hole Harefield Place (Uxbridge) Municipal Golf Course and possibly even due to the reduction in population, as a result of the war, it appears the relief course was no longer considered neccessary and was not re-opened when the war ended.

1945 - The first aerial photographs of the course show the layout much as it is now, although the numerous drainage ditches were not in place. There are bunkers, visible along the 10th hole, at the point it is believed the original 1st green was sited and at the site of the 'spare green' along what is now the 3rd. The area that is now the 4th, 5th & 6th, however, looks different and further research will be required to confirm the layout then is as it is now & also the whereabouts of the pitch & putt course.

The questions that are still being researched are:

9 hole incarnation - What was the exact layout of the original 1st & 2nd holes? Where exactly were the tee box & green for this now defunct hole?